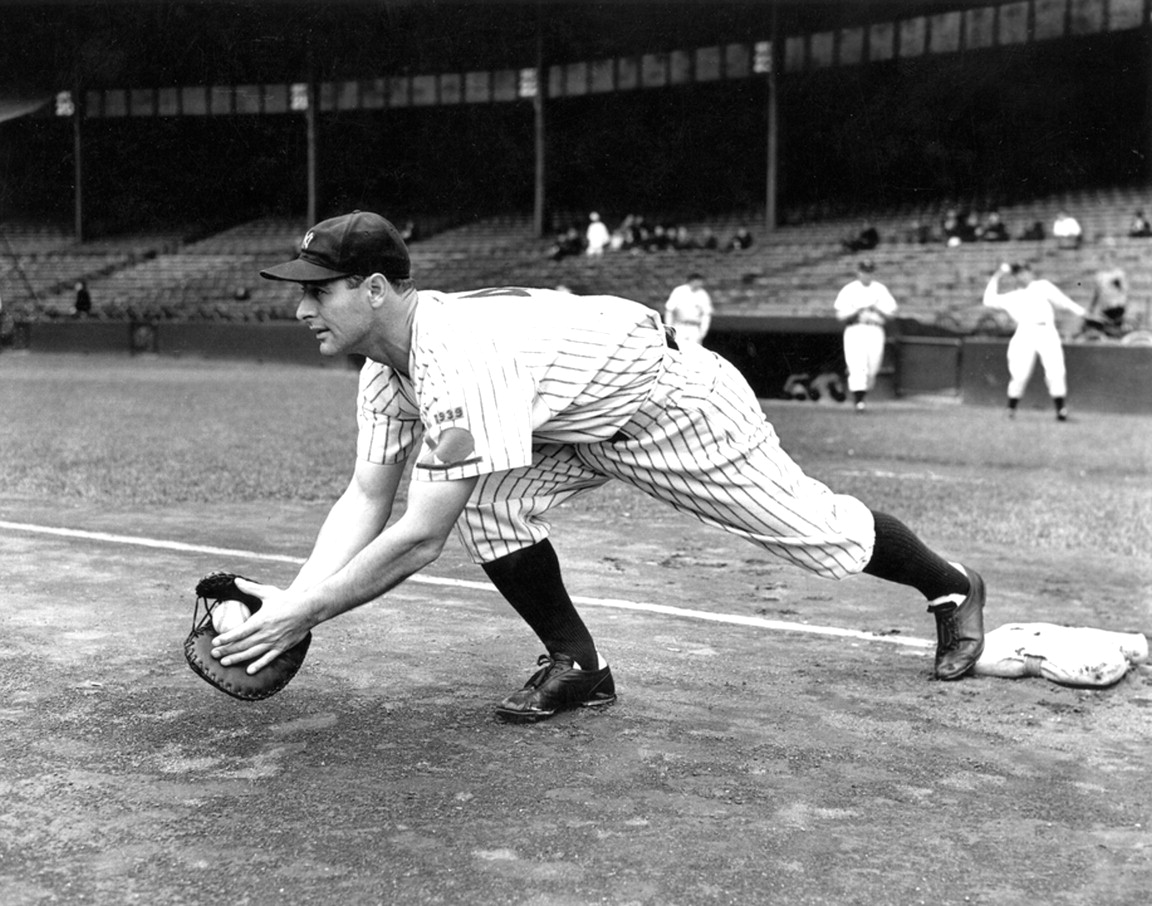 The week of June 2 marks the first anniversary of Lou Gehrig Day around Major League Baseball. This event has been established to bring awareness to the affliction which felled the great New York Yankees star, Amyotrophic Lateral Sclerosis, or ALS.

On this day the game of baseball invites the entire world to remember the majestic legacy of Lou Gehrig, and to recognize and honor those living with and battling ALS.

This is the day when ballparks throughout the country feature special on-field moments for stories, and reflections, among the various activities to spotlight the terrible illness known to fans as “Lou Gehrig‘s disease.” There is also a push for charitable fund-raising to sponsor more research to find a cure. Sadly, in the 81 years since Lou Gehrig died, very little progress has been made in this effort.

In observance of Lou Gehrig Day, every manager, coach, and player wears a special “Lou Gehrig Day” patch on his uniform, and every home team displays logos reading “4-ALS” in honor of the great slugger’s uniform number 4. He wore that number because he hit fourth, or cleanup in the batting order, just as Babe Ruth wore number 3 since he hit third before Gehrig as number 3 on the Yankees starting lineup card. That was how numbers on uniforms were assigned to players originally.

In baseball history, teams have now retired approximately 200 numbers. Gehrig‘s number 4 was the first uniform number to ever be retired — not only in baseball, but across all professional sports. This act had never been done before, anywhere, at any time. The Yankees have now retired every single-digit uniform number they ever had, and numbers 1 through 9 are all unavailable to new players joining the team.

Fans attending games on Lou Gehrig Day, as well those watching and listening to coverage at home, see and hear special content concerning both Gehrig‘s amazing life, legacy and career, as well as efforts to find a cure for the debilitating disease which took his life during a Hall of Fame baseball career.

And June 2 happens to be a day with special significance with respect to Lou Gehrig. That date was not selected at random. It was on that particular June 2 in 1925 he began a legendary streak to establish a record of 2,130 games in a row — consecutive games — played as the first baseman for the New York Yankees. This remarkable streak ended only when Gehrig‘s fatal illness finally forced him off the field.

Ironically, June 2 was also the sad date on which Lou Gehrig passed from complications of ALS.

Lou Gehrig won two Most Valuable Player Awards, one batting title, and one triple crown. His powerhouse Yankee teams won six World Series, and he appeared in seven All-Star games (the event only first commenced midway through his career). Samuel Goldwyn made a momentous movie about his life, THE PRIDE OF THE YANKEES (1942), with Gary Cooper in the title role. Earlier, and before Gehrig was diagnosed with ALS, he starred as an actor playing himself in an outdoor action adventure B-Western film, RAWHIDE (1934). Such was the universal popularity of this great man.

Now and going forward on every June 2, by recognizing baseball’s “Iron Horse” in this way, Lou Gehrig thus joins Roberto Clemente and Jackie Robinson as the only three players ever to be honored annually with dedicated, league-wide days of commemoration for their legacies.

One postscript: on this coming July 4, baseball will remember another important date in the life of Lou Gehrig, for it was on that day in 1939 — Lou Gehrig Appreciation Day — when this magnificent Yankee star delivered his farewell “luckiest man” speech. And he did so during a home plate ceremony before a tearful, packed house of baseball fans at Yankee Stadium, openly memorializing his departure from the game under tragic circumstances due to the early onset of ALS symptoms.