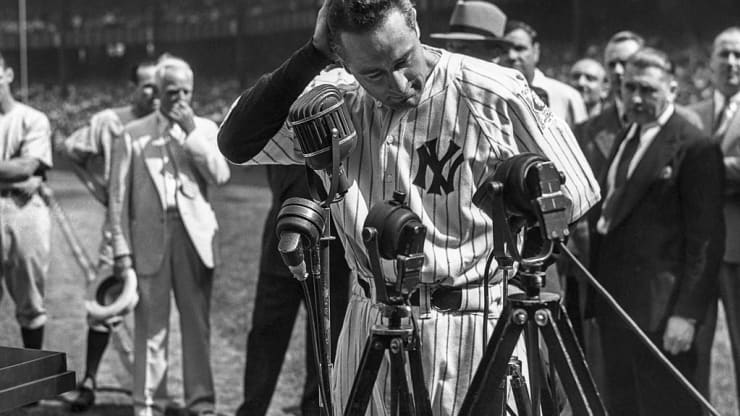 Lou Gehrig #4 of the New York Yankees is shown before the mic delivering his farewell speech on Lou Gehrig Day on July 4, 1939 at Yankee Stadium in the Bronx, New York.

June 2 is now Lou Gehrig Day in baseball. This event has been established to bring awareness to the rare neurodegenerative affliction which felled the great New York Yankees star — Amyotrophic Lateral Sclerosis, or ALS.

On this day, the game of baseball invites the entire world to remember the majestic legacy of Lou Gehrig, and to recognize and honor those living with and battling the incurable ALS.

June 2 of 1925 was the date this quiet baseball hero began a legendary streak to establish a record of 2,130 games played in a row — that’s 14 years of consecutive games — as the first baseman for the New York Yankees. This remarkable streak ended only when Gehrig’s fatal illness finally forced him off the field.

In a sorrowful irony, June 2 was also the date on which Lou Gehrig passed from complications of ALS exactly two years later in Riverdale, New York, 1941, just shy of his 38th birthday. And not just baseball fans, but an entire nation mourned his loss.

In the history of baseball, it was the game’s most publicized tragedy.

Now and going forward on every June 2, by recognizing baseball’s “Iron Horse” in this way, Lou Gehrig thus joins Jackie Robinson and Roberto Clemente (again, age 38) as the only three players ever to be honored annually with dedicated, league-wide days of commemoration for their legacies.

Then on to July 4, which is not only Independence Day in the United States, a day of great celebration for patriotic Americans, but for baseball fans it also marks a special anniversary.

July 4, 1939 was the day of Lou Gehrig’s farewell “luckiest man” speech on “Lou Gehrig Appreciation Day” in a ceremony at home plate between games of a doubleheader at Yankee Stadium in New York. This was a momentous day in the game’s storied history, as well as an exceedingly sad one with respect to this magnificent star.

A quickly deteriorating Lou Gehrig had just returned from the Mayo Clinic in Minnesota where his puzzling medical condition had been diagnosed as ALS — now better known as Lou Gehrig’s Disease. His baseball career was immediately over.

The hallowed grounds of Yankee Stadium were packed to the rafters that day, with 61,808 shocked fans in attendance. Among them, to pay homage to Lou Gehrig, was New York’s colorful mayor, Fiorello La Guardia, along with Gehrig’s “greatest of all time” 1927 Yankee teammates, including Babe Ruth, who was overcome with emotion in a poignant moment and hugged Gehrig as he wiped away tears.

Oratory and rhetoric were not distinguishing characteristics for the modest and unassuming Lou Gehrig, particularly in contrast to the overpowering personality of the larger than life Babe Ruth. Yet somehow, in but a few minutes, before dead silence at Yankee Stadium, the dying Lou Gehrig stepped to the microphone, uselessly wearing his pinstriped Yankee uniform, hands clasped, head down, a symbol of courage, and delivered a moving and eloquent farewell speech for the ages.

With assistance from his wife, Eleanor, he had composed his memorable remarks the night before.

In a lesson for all, the Pride of the Yankees offered no complaints, but only gratitude. Always baseball’s perfect role model for the country’s fans, Lou Gehrig remained a class act to the end.

The press corps of sports reporters and newsreel cameras covered the solemn event memorializing Gehrig’s departure from the game under tragic circumstances due to the early onset of ALS symptoms, but there exists no complete recorded or filmed version of the occasion in its entirety. The well known filmed footage we do have constitutes only excerpts.

Therefore we cannot offer a positively definitive, transcribed version of Mr. Gehrig’s touching speech, but there is agreement among serious baseball scholars that the most accurate account of what he said is the text to be found in the book by Talmage Boston, titled 1939: BASEBALL’S TIPPING POINT.

Imagine if you can, watching in eerie silence, as an ethereal shared emotion enveloped everyone at Yankee Stadium that day, when Lou Gehrig spoke these unforgettable words in saying goodbye before a stunned crowd of admirers:

“Fans, for the past two weeks you have been reading about the bad break I got. Yet today I consider myself the luckiest man on the face of the earth. I have been in ballparks for seventeen years and have never received anything but kindness and encouragement from you fans.

“When you look around, wouldn’t you consider it a privilege to associate yourself with such fine-looking men as are standing in uniform in this ballpark today? Sure, I’m lucky. Who wouldn’t consider it an honor to have known Jacob Ruppert? Also, the builder of baseball’s greatest empire, Ed Barrow? To have spent six years with that wonderful little fellow, Miller Huggins? Then to have spent the next nine years with that outstanding leader, that smart student of psychology, the best manager in baseball today, Joe McCarthy? Sure, I’m lucky.

“When the New York Giants, a team you would give your right arm to beat, and vice versa, sends you a gift—that’s something. When everybody down to the groundskeepers and those boys in white coats remember you with trophies—that’s something.

“When you have a wonderful mother-in-law who takes sides with you in squabbles with her own daughter—that’s something. When you have a father and a mother who work all their lives so that you can have an education and build your body—it’s a blessing. When you have a wife who has been a tower of strength and shown more courage than you dreamed existed—that’s the finest I know.

“So I close in saying that I might have been given a bad break, but I’ve got an awful lot to live for. Thank you.”